Just published: the annual report of the Youth Smoking Prevention Foundation. See what happend and was accomplished by the foundation, TabakNee and Rookalarm.
By the web editor

Make smoking a thing of the past: this is the goal of the Youth Smoking Prevention Foundation. How to achieve that? Simple. Ensure that children do not start smoking, according to the annual report on 2014. For that to happen, smoking must be made unaffordable – i.e. excise duty must be raised drastically – and the roughly 60,000 sales points in our country must be reduced significantly in number.

If sales were limited to specialist tobacco shops, their number would drop to just 1500! With this message, the founders and lung doctors Wanda de Kanter and Pauline Dekker travel the country tirelessly and appear regularly in the media. In the meantime, journalists at TabakNee – an important branch of the foundation – fanatically investigate the tactics and tentacles of the tobacco lobby. And the social media campaign Rookalarm (another initiative from the foundation) mobilises parents, grandparents and educators, through children, to put pressure on politicians to take effective measures against smoking.

Has the foundation achieved its goal? Thanks to the efforts of the foundation, tobacco seems to be back on the political agenda, and lobby expert Erik van Venetië has praised the foundation's approach to the skies. 'Its lobby,' he wrote, 'is a good example of successful lobbying for a good cause.'

Good news therefore, but straight away we must keep expectations modest, because there is still a long way to go. For the figures tell a painful story: the number of smokers is hardly declining, if at all. Every day some 126 Dutch children under the age of 18 start smoking. Over the past decade the number of children in lower secondary education who smoke has not declined. In fact, it is ten times higher than the level among children in higher secondary education. Besides addiction, the cultural and social context is an important factor.

Tobacco responsible for 30 percent of all cancers

Some 19,000 deaths occur in the Netherlands each year as a result of smoking, excluding deaths caused by passive smoking. Smoking is responsible for no less than 30 percent of all cancers and relapses of the disease, and probably much more besides. The number of women with lung cancer has doubled over the past ten years. And so, the biggest priority must be on measures to prevent smoking.

The policy to discourage tobacco use is, however, a long-term affair, and the term that best describes it is 'treacly'. Effective campaigns were abolished years ago. People know that smoking is 'bad', but few people know exactly what bad means. Moreover, a child pays no attention to the word 'bad'.

But we are making progress! And we have listed the highlights of the foundation from 2014 for you here.

Legal action against the State

On 8 September the Youth Smoking Prevention Foundation, represented by mr. Phon van den Biesen instigated legal proceedings against the Dutch state on account of the government's systematic breach of the international anti-smoking convention, known as the Framework Convention on Tobacco Control (FCTC), from the World Health Organization (WHO). The legal action centres on the provisions of Article 5.3 of the convention, which states that the government shall act to protect its health policies from all vested interests of the tobacco industry. Even though the Netherlands has signed this convention, the tobacco industry is still consulted about policy issues at various ministries.

In the lead-up to the summons, TabakNee issued a series of articles detailing examples of flagrant breaches of the FCTC convention. The full text of the summons can be read here. Just how well TabakNee monitors all matters relating to the FCTC convention can be read in articles like this and this. It is significant that the ministry, prompted by the court case, now wants to discuss the implementation of the FCTC with the foundation. In late 2014 a meeting was set up with Martin van Rijn, the State Secretary for the Ministry of Health. The case generated widespread publicity, even on the main national news bulletins.

Discussion with the Confederation of Netherlands Industry and Employers (VNO-NCW)

The national employers' organization VNO-NCW now wants to talk with the foundation. At the end of 2014 the foundation met with its director Niek Jan van Kesteren to discuss whether they could jointly do something to combat youth smoking. Follow-up meetings for 2015 are planned. No doubt you will hear more about this matter in due course.

On 1 December the Youth Smoking Prevention Foundation submitted a complaint to the Ombudsman concerning the Defence sector's 'policy to encourage smoking'. It goes as follows: in July TabakNee reported in the series 'Cheap cigarettes from Defence' on the price reductions on tobacco products offered to military personnel at NATO bases. Moreover, cigarettes can be sold to servicemen as young as 17 there. When the Ministry of Defence did not respond to our question, we enlisted the help of the National Ombudsman.

Media Woman of the Year

Wanda de Kanter, chairperson of the Youth Smoking Prevention Foundation, received the Woman in the Media Award 2014 for her effective performance as media expert on the tobacco lobby. Her projects TabakNee and Rookalarm, and the accompanying media appearances of the lung specialists Wanda De Kanter and Pauline Dekker, have significantly boosted the reputation of the Youth Smoking Prevention Foundation.

On 31 December 2014, the TabakNee website contained exactly 466 articles, the majority of them covering its own news items and research. And the articles are well read by the media, government and politicians. We know that because of the subscriptions to the TabakNee newsletter. According to Google analytics, TabakNee has received no fewer than 1.1 million views since its launch up until 31 December 2014.

TabakNee received confidential documents concerning the Philip Morris lobby in Brussels. These resulted in a five-part series entitled 'The Philip Morris – Files' (Part 5 here), which offers a unique glimpse behind the scenes of the lobby in the amendments to the Tobacco Products Directive. The series led to a successful collaboration with the EenVandaag current affairs programme on television, whose report aired on 25 February. The EenVandaag website credits TabakNee as the source of this broadcast. TabakNee came with a small follow-up: research shows that the tobacco lobby toned down the Tobacco Products Directive.

In June TabakNee exposed the close ties maintained by certain municipalities and provinces with the tobacco industry. The municipalities of Den Helder, Groningen and Bergen op Zoom, and the provinces Zeeland and Noord-Brabant work together with tobacco manufacturers. For example, some coastal municipalities keep beaches clean with Japan Tobacco International, and the province of Groningen is promoted by British American Tobacco. That is in violation of the previously mentioned international anti-smoking convention. Minister Plasterk was summoned to intervene but failed to respond. We wrote about the issue again in August, and that prompted questions in parliament. According to State Secretary Van Rijn, however, no rules were broken.

In the series 'The front-line troops of tobacco', all front organizations (so-called smokers interest groups) in the Netherlands, their relations to one another and their collaboration with the tobacco industry were exposed. An article from this series was mentioned in a government memorandum.

In another series, this time on 'the tobacco syndicate' (here is the last of 11 instalments), it was revealed that hiding behind Postbox 262 in Leidschendam is a 'syndicate' made up of supermarkets (CBL), the lobby group of small tobacco shops (NSO), all sorts of tobacco-loving foundations, Detailhandel Nederland (which represents retailers), and the tobacco industry, all of whom are lobbying against any reduction in the number of sales points for tobacco.

In late November the Algemene Onderwijsbond (General Union of Education) reported that it plans to expose the investments in tobacco held by ABP, the pension fund for employees in the government and public sectors. A good development, because TabakNee published a lot about ABP's tobacco investments and regularly sent letters to various parties involved. To be continued in 2015.

Since the launch of its Facebook page in April 2013, Rookalarm has accumulated almost 5500 likes. Rookalarm is also making waves on YouTube: the documentary 'Albert Heijn heeft het allemaal' ([Supermarket] Albert Heijn has it all) was viewed almost 300,000 times in 2014, and 'Het Raadsel van groep 8' (The mystery of group 8 [i.e. final class primary school]) almost 70,000 times. The top five short films from Rookalarm have together accumulated more than 480,000 views. That is over 1300 a day.

In 2014 Rookalarm won the Spin Award for 'best content', and the Rookalarm campaign was also nominated for a SAN ACCENT, the professional communication prize by, for and from advertisers. In 2015 Rookalarm will release the final film 'De vervangers' (The replacements).

We have not gone unnoticed. But we also see a need to combat the government's current smoking policy with renewed efforts and always based on facts, following the examples set by countries like Australia, Ireland and England and their Ministers for Health. Here it is all taking too long. The number of smokers is simply not declining, and it will not do so unless the government starts to see tobacco as an important public health issue instead of a money-making machine. The only thing that will help is to make cigarettes unaffordable for children and limit sales to specialist tobacco shops.

The Youth Smoking Prevention Foundation and TabakNee will continue their efforts will the same energy in 2015. Keep supporting us! 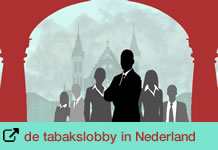 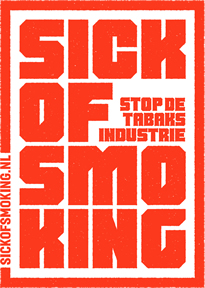